Evergreen CO is filled with history! Click the different tabs below to learn more. 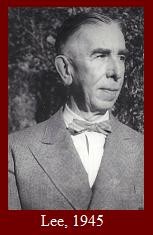 Some of the first settlers in Evergreen were the Humphreys. The property was first developed by John J. Clarke in 1878 when he homesteaded 350 acres.  He raised cattle, logged and built a small homestead cabin that still exists as the oldest part of the house. The center of the house and the stone-walled root cellar were built by "Cousin Jack," the best carpenter in Central City, in 1883. As most Evergreen residents, Clark used the land to log wood to meet the growing demand for lumber in Denver.

In 1920 Lucius (Lee) and Hazel Humphrey bought the ranch and moved here in 1921 with their daughter, Hazel Lou. The Humphrey's named the property Kinnikinnik Ranch.

Lee Humphrey was born at his grandfather's farmhouse in Jericho Center, Vermont in 1883. His ancestors came to New England from England in 1680. His newspaper career began early as he was the editor-in-chief of his school newspaper at Edmonds High Schools. He moved to Colorado in 1911 with his first wife Blanche. She died of tuberculosis in 1914. 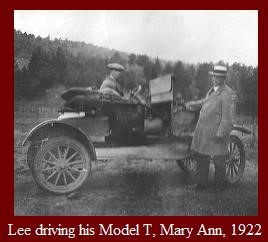 He too was known as the mountain area's first year-round Denver commuter. An honor indeed as Evergreen did not become known as a commuter community until the 1950s. He drove a Model T, that he named Mary Ann, for two and a half hours daily to reach the copy desk in Denver. At the time of his death in 1946, the Rocky Mountain News estimated that he had driven over a half a million miles - just to get back to the home and family he loved. 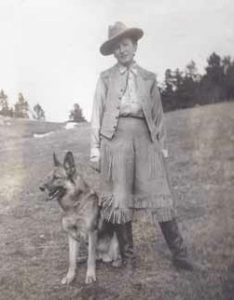 Step back in time on a vintage colorado ranch at a Farm to Fork dinner, Hay days and horse rides and farm animal visits or a Bluegrass and BBQ event. All are made possible thanks to the thoughtful preservation of Kinnikinnick Ranch.

Hazel Lou Humphrey was born in 1917 to parents Lee and Hazel Humphrey. The family acquired their 350-acre ranch in 1920. Hazel Lou grew up, attended school on and continued to live at the ranch all of her life. She became an accomplished horsewoman and kept a herd of nationally recognized Toggenberg goats, along with numerous other animals. Her father, a  newspaperman, worked for 35 years for both the Rocky Mountain News and Denver Post. He was the mountain area's first Denver commuter, driving his Model T to and from work daily. The home and property were renovated over the years to house both the family and numerous treasures from the worldwide travels of Hazel Lou's mother. Buffalo Bill's horse "Whitey" even stayed at the ranch briefly. 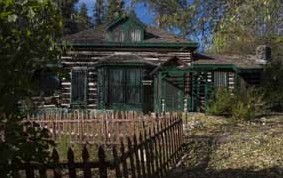 Proud of her family's heritage, Hazel Lou left the property, home, and all household belongings to the Museum upon her death. Today the living history museum entertains and educates offering hands-on events, tours, and opportunities to experience ranch life as it was in the 1920s-1940s. Participants learn folk art, how to make homemade root beer or how to quilt or crochet. Kids make beef jerky and explore Native American music at Summer camp. At Toddler Tuesdays, young ones enjoy storytelling play dates. Visitors can celebrate their special event at an adult or children's tea party or browse for unique gifts at the ranch's Trading Post.

Hiwan's architecture and collections speak of a bygone and elegant age. The museum is furnished with original and historic furnishings, and its artifacts include a sampling of the Native American art collection of Eric Douglas, longtime curator of Native Arts at the Denver Art Museum. Unique programs, displays and exhibits, which are sponsored by the Jefferson County Historical Society,  bring history to life at Hiwan. Active craft and interpretive school programs are complemented by field trips, subsidized by the Jeffco Open Space Foundation. 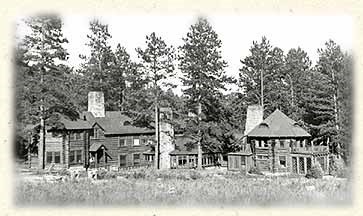 Hiwan Homestead was a cherished mountain retreat to the families who lived within its rough-hewn walls. In the 1890's, Mary Neosho Williams, a Civil War widow, and her daughter, Josepha, were among the aristocratic society of Denver who camped at Evergreen.

They acquired the simple log structure and hired John "Jock" Spence, a Scottish carpenter, to convert it to a summer cottage. The property was named Camp Neosho after Mrs. Williams' middle name. Overnight guests would stay in tents, comfortably equipped with wood floors, stoves and double canvas walls.

Josepha Douglas died in 1938 and the house was sold to Tulsa oilman, Darst Buchanan. His wife renamed the land Hiwan Ranch. Buchanan's Hiwan Hereford cattle were known throughout the country and won many stock show prizes. 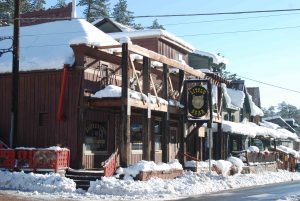 The legendary Little Bear Saloon, complete with swinging saloon doors, wooden bar stools and brass registers, has provided live entertainment in historic downtown Evergreen for 40 years. it is hard to believe the rowdy establishment's original core building was once St. Mark's in the Wilderness Episcopal Church.

That church, built in 1875, was moved to its present Main Street location in the 1890s. during its time as Prince Mccracken's Drug Store and Round-Up dance Hall (with auto parts), it is said to have been a prosperous venue for bootleggers who during Prohibition years sold their wares out back. Ross Grimes purchased the estate trust-controlled property in 1964. its former church designation allowed the business owner to take advantage of an exemption from alcohol regulation, and Ross says it soon became, "…  the only bar in town." during the 1960s when it transformed into the Red Ram (sign still visible on the Little Bear's Roof) it hosted amazing musical greats like Duke Ellington, Count Basie and members of Glenn Miller's band. 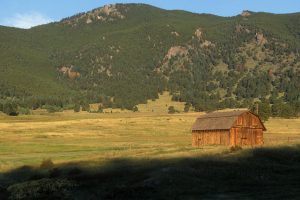 Landowners were discussing their intentions to develop Noble Meadow in Evergreen as early as 1978. A soft real estate market and various protesting citizen groups stalled development plans but it wasn't until 1980 when the newly formed Mountain  Area  Land  Trust (MALT) got involved that solutions favorable to all parties were ultimately suggested. The mission of Evergreen's MALT, a preservation organization serving six Colorado counties, is to save scenic vistas, wildlife habitats, water resources and natural areas for existing and future generations.

MALT initiated its popular "Save Noble Meadow " campaign and the 408-acre meadow, one of Evergreen's most visible and appreciated landmarks, was successfully preserved. MALT and local citizens not only saved a unique elk grazing and calving area, but their efforts also launched a cooperative project involving the developer/landowner, Evergreen Park and Recreation District and the Jeffco Open Space, which later became a model for citizen initiatives statewide.

Since that 1993 success, MALT has conserved 20,266 acres: 14,707 acres in 68 private conservation easements, 5,557 acres through facilitated public projects and 92 acres as a part of the 500+-acre Pennsylvania Mountain Natural Area (PMNA). MALT's work with the PMNA area near Fairplay, one of the longest-term alpine research sites in the country, ensures that ongoing scientific research conducted by more than 100 scientists over the last 38 years will continue. 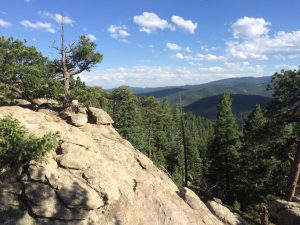 Alderfer Three Sisters Park, a part of Jeffco Open Space's 53,000-acre park system, was once the working ranch of the Alderfer family. in 1977, at Hank Alderfer's suggestion, it was acquired by the system, with additional adjacent properties purchased as recently as 2002. originally a Hester family homestead, the Alderfers initially raised silver foxes on the ranch. After World War II, when Russian fur pelts flooded the market, fur prices plunged and the mountain area's briefly profitable fur industry collapsed. Like most mountain ranchers, the Alderfers released their silver foxes into the wild.

They focused next on Angus cattle ranching, supplementing their income in the 1970s by pasturing horses. The family also operated a private sawmill, evidence of which still exists near the Wild Iris Meadow Loop Trail. They welcomed neighbors for picnics, hiking, and camping on the property's three miles of trails, even hosting a cross-country ski course and operating a towrope for downhill skiing. High school classes studied ecology at their property and a rock-climbing club practiced there.

In 1974 The Evergreen Naturalists Audubon Society put up a trail of bluebird nests in the meadow. Thanks to Mr. Alderfer's wise suggestion and Open Space's good decision, the ranch is now a public park accessible to all. Recreational and event opportunities abound on 770 acres of meadow with rock outcroppings and creekside lands where hikers, bikers, horseback riders, and wedding attendants gather today. 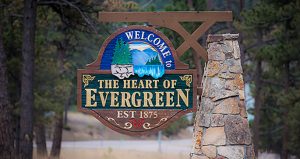 Evergreen's origins date back to 1859 when a closely-knit group of families settled here and formed a ranching community. During the late nineteenth century, due to its proximity to Denver, city residents increasingly came up the hill to build summer homes and hunting cabins. After the dam was built and the reservoir filled in 1928 creating Evergreen Lake, the area increased in popularity.

Downtown, often referred to as "The Heart of Evergreen", is still a place where city residents come "up the hill" for a day in the mountains. Just 30 to 45 minutes from Denver, downtown Evergreen is an easy, refreshing day trip.

Our walkable downtown district extends from the Evergreen Lakehouse, around the Evergreen Lake, along Main Street to Bear Creek and Highland Haven Creekside Inn and up Meadow Drive as far as Hiwan Homestead Museum."